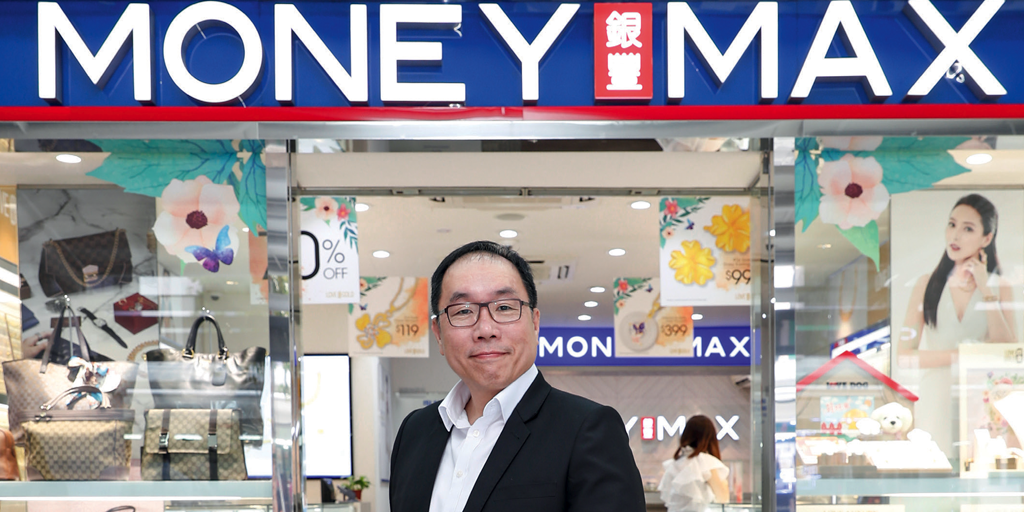 Going online is also part of MoneyMax’s efforts to appeal to younger customers. Another major move to woo that demographic was taken in 2016, when the company entered territory that was relatively unheard of for pawnshops: branded luxury goods such as handbags.

From reinventing an old trade to entering new markets and updating its offerings, MoneyMax is now expanding into a different trade: running a business-to-business auction marketplace. The idea came from Japan, one of the “main sourcing centres” for luxury items, says group chairman Lim Yong Guan.

Jewellery collections and designer handbags fill the shop window. Indoors, friendly staff wait behind glittering display counters. This is not a regular boutique, but a branch of pawnbroker MoneyMax Financial Services.

Over the last decade, the industry has expanded beyond traditional pawnshops with tiled facades and metal grilles.

MoneyMax is one of several modern pawnshop chains that sprang up in the late 2000s, with sleek shopfronts that put pre-owned products under the spotlight. But its re-invention of the age-old trade did not stop with more inviting shopfronts.

The last decade has seen MoneyMax going digital, going abroad, and going into related businesses. Summing up the firm’s modern-minded approach, group chairman Lim Yong Guan says: “I don’t like to use the term ‘pawnbroking’. I prefer to talk about ‘secured loans’.”

MoneyMax was started by the family behind SK Jewellery Group, until recently known as Soo Kee Group. The idea originated in 2007, even before the global financial crisis hit. “We thought sales had hit a wall, so we had to change.”

He saw two possible approaches. One was to rely on their existing skills and core competencies, but seek new markets and niches.

SK Jewellery took this path in setting up Love & Co, which specialises in bridal jewellery.

The second approach: to look for completely new opportunities, by applying their know-how in new areas. This was how he and his siblings decided to set up MoneyMax.

There were many complementary business aspects that made this new venture ideal, he notes.

SK Jewellery’s existing expertise in diamonds and gold was crucial: “We know how to value the items. That’s the most important.”

“If you want to open a pawnshop, you need reliable staff,” he adds.

This includes not just staff with expertise in the jewellery trade, but also those in customer service.

The group’s experience in retail also meant they were well-placed to handle unredeemed pledges or items sold directly to MoneyMax.

The rate of unclaimed pledges is low, at under 3 per cent, but “not everyone wants to pawn and redeem, some just want to dispose of the items”.

This meant adequate scope for a business model that incorporates a retail marketplace.

The pre-owned market has one important advantage that makes it attractive, particularly for collectors: “It allows you to get items that are no longer available.” These might include limited edition luxury watches, or models that are simply no longer in production.

However, “it was hard at first” to go from jewellery retailing into pawnbroking. “You are totally new to this business.”

But MoneyMax found ways to set itself apart. It offered a one per cent interest rate – lower than the prevailing 1.5 per cent rate.

It opened multiple branches, and obtained approval from the authorities to offer longer hours than the norm, staying open till 8pm so customers could visit after office hours.

And of course, its image was a far cry from that of the traditional pawn business.

The stores have a “three-in-one concept”, says the group chairman.

From the outside, the clean-cut, brightly-lit signage aims to resemble that of financial institutions: a professional, established look, to give customers confidence.

Step inside, and one is surrounded by a familiar retail environment, with attentive staff and attractive jewellery displays.

The pawnbroking window is placed at the back of the outlet, to provide “maximum privacy for customers”.

Instead of unfriendly metal bars, only a clear glass panel separates the customer from the staff.

This is in contrast with traditional pawnbrokers who “stand on a platform behind the screen and look down at you”, in an intimidating display that reduces the customer’s bargaining power. “We want to act like a consultant, a friend,” he says.

The friendly approach is also in line with the more optimistic gloss that he puts on the act of pawning items. “Going to a pawnshop isn’t always because the customer has fallen on hard times.”

Customers could be seeking funds for investment or business opportunities, for contributing towards the cost of a property, or even for a travel holiday, he says.

MoneyMax has done some travelling of its own. In 2014, it expanded to Malaysia with the help of a partner there, and now has 28 outlets in the country. To make this move possible, it was important to first “create a proven business model” in Singapore.

Then, given the limited nature of the Singapore market, it made sense to go overseas. “Once we have a proven model, we search for new markets.”

In pawnbroking, a trade so reliant on reliability, the squeaky-clean Singapore brand is an asset, he adds.

“The Singapore brand has a reputation for honesty, especially within the other Asean markets.”

Another new frontier that MoneyMax explored was cyberspace.

This began in 2015, when it started offering online valuation services. On MoneyMax’s website, customers can submit a photograph of their items for an initial estimate.

The same year, MoneyMax opened an online store for its retail items.

In April 2018, this was rebranded to look more like an upmarket e-commerce site for fashion accessories, under the brand Love Luxury by MoneyMax – the same brand used at the physical stores.

Since March 2018, MoneyMax has also offered a web-based e-renewal service for existing customers. Previously, customers would have to go to a physical branch in order to pay the interest on their loans.

Now, they can check their statement and pay online “any time, anywhere. It’s like having a 24-hour shop”.

Going online is also part of MoneyMax’s efforts to appeal to younger customers.

Another major move to woo that demographic was taken in 2016, when the company entered territory that was relatively unheard of for pawnshops: branded luxury goods such as handbags.

“We went into branded goods because that’s what young people like.” He estimates that about three in 10 of MoneyMax’s customers today are in their 30s.

From reinventing an old trade to entering new markets and updating its offerings, MoneyMax is now expanding into a different trade altogether: running a business-to-business (B2B) auction marketplace. The idea came from Japan, which is one of the “main sourcing centres” for luxury items, says the chairman.

“Japan is big on auctions,” he explains – from the famed tuna auction at Tsukiji fish market, to consumer websites such as Yahoo! Auctions.

One Japan-based online auction company caught his eye: Aucnet, a B2B platform which specialises in a few categories such as cars and branded goods.

MoneyMax and Aucnet partnered to launch SG e-Auction on May 9, 2018.

Aimed at traders in Asean, the site focuses on areas where MoneyMax has expertise: luxury goods, and gold and diamond items.

Besides serving as an auction platform, it provides inspection and evaluation services.

The next step, he says, is to link the SG e-Auction site to Aucnet by the start of the third quarter of 2018, giving traders on both sites access to the other side’s offerings.

Compared to a business-to-customer model where there is a need to actively woo customers, one advantage of going B2B is that as long as your offerings are good, firms “will come and buy from you”.

Indeed, at the launch on May 9, many congratulatory flower arrangements were sent by ostensible pawnshop rivals. By blazing a trail, MoneyMax might well be helping the whole industry move forward.

From jewellery retailing, to pawnbroking, to risk and compliance

When MoneyMax expanded to Malaysia in 2014, Jennifer Tan was in charge of overseeing the move. She had to deal with a different client profile and a new team of local staff, and learn basic Malay. But she took it in her stride and adapted. The adaptation has not stopped. In August 2017, she returned to Singapore to become MoneyMax’s deputy head of risk and compliance.

Jennifer Tan, 60, would never have considered working in traditional pawnshops, with their “jail-like” bars and intimidating feel. “If you ask me to join them, obviously I wouldn’t join them.”

Yet when she had to move from a long career in jewellery retailing to working in MoneyMax, she found the transition almost seamless.

“The concept is totally different (from traditional pawnshops),” she says.

When Ms Tan joined Soo Kee Group as a retail manager in 2003, she already had more than a decade of experience in jewellery retailing.

She rose to the position of area manager, overseeing several stores.

Then in 2010, she became a senior area manager for MoneyMax instead.

After all, each MoneyMax branch is fronted by a retail area, with display cases full of sparkling jewellery. The clientele is not that different either. Her many years in retail prepared her for the change, she says: “On the floor for so long, I came across a lot of different customers.

“In MoneyMax, the customers we encounter are quite similar. You don’t feel like you’re in a different sector.”

Perhaps the biggest difference was having to verify the credibility of MoneyMax customers – a delicate task, she says. “You have to be very sensitive when you talk.”

There were also technical skills she could apply from her retail days.

She had to learn how to authenticate and value watches and luxury goods such as handbags.

She was no stranger to the other assets that MoneyMax handles, however: “Valuing gold and diamonds is not an issue for me.”

When MoneyMax expanded to Malaysia in 2014, she was in charge of overseeing the move.

It helped that reliable business processes had already been developed in Singapore, she says: “You bring over the same format.”

She did have to deal with a different client profile and a new team of local staff, and learn basic Malay to better communicate.

But the cheerful Ms Tan took it in her stride: “It’s a matter of how you adapt to the environment.”

The adaptation has not stopped. In August 2017, she returned to Singapore to become MoneyMax’s deputy head of risk and compliance.

She has to stay up to speed on the many rules and regulations surrounding pawnbroking.

“There are many preventive (regulations) against money laundering, terrorism. We have to look into all these gaps.”

As before, she is tackling the new challenge by building upon what she already knows: “With the experience I have, I come to know the loopholes (that must be addressed) pretty fast.”

A Safer Shopping Experience with MoneyMax During the Pandemic
August 26, 2021

Making the workplace safe for everyone
August 18, 2021